Posted on October 16, 2019 by balefireblades

∴ A Meeting of Three∴

Scowling into your empty cup, you skip the pewter bit between your fingers and wait. A meeting of three, the note said, in its cryptic, spidery scrawl. Three for beginning, middle and end. Mind, body, spirit. Maiden, mother, crone. They would know you, the letter said, by the coin.

You toss the metal disc into the air and catch it, slamming it down on the rough wooden table. A cast image glares back at you: an equilateral triangle, bisected by a sword. A cult? A guild? A secret order?

The second was discovered soon enough – sitting up at the bar, coin peeping conspicuously from between scattered change – though she was none the wiser as to the meaning of the note. She sits across from you now, and you can tell your impatience irks her.

Just as you make up your mind to leave, the door opens. You freeze as a figure pushes through the portico and shakes the snow from his hood.

The man may be remarkable, but it’s his companion your eye is drawn to: a slender greatsword, almost as tall as its wielder, with three fullers lining its blade and, at its centre, two blackened bars reaching down from the cross to create a protective triangle.

And there is no doubt.

Compulsive yet controversial, this spadone is modelled on an original housed in the Metropolitan Museum of Art, as seen in the image to the right. 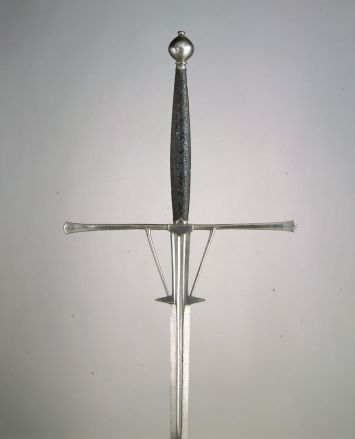 The purpose of the unusual bars reaching from the crossguard to the lugs is speculative, though they are likely to offer additional protection during blade – on – blade actions, deflecting the opposing blade further down the quillon.

In recreating the hilt, we brought the bars together in a ring to the rear of the blade. While this addition is partly speculation, it is a plausible structural component, and adds further protection.

A similar bespoke montante would start at £1200 plus postage. 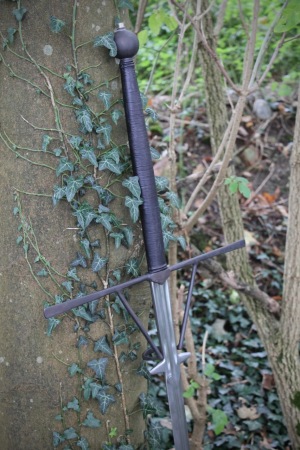 The hardwood grip is wrapped in strong linen thread, then finished in black leather. The crossguard, side bars and pommel are oil blackened to a matte finish. The blade has one long fuller, reaching to 1/3 of the blade, and two decorative fullers in the ricasso. The construction is completed with a rounded steel nut.

Looking for an unusual replica – or something completely new? Get in touch to discuss your ideas.