The Vittoriosa Rapier and Dagger

The stone flags bite at your knees, cramped as they are with time and tension. Ignoring the pain, you roll polished beads between your fingers, murmuring familiar incantations, willing your prayer to drown out the sound of cannon from the fortress above. The noise is bone-shaking, bombastic, at odds with the quiet sanctuary of the chapel – but, you remind yourself, as long as it rings out, there is hope.

Your pious petition is shattered by a new clamour – the insistent thud of a fist against the chapel door. Heart leaping, you scramble to your feet, pressing the rosary to your lips in one last silent appeal before stumbling toward the portico.

“Who is it?” you demand, your voice thin and frightened on the incensed air.

The reply is so familiar, so commanding, that your knees nearly give way again as you scramble to unbar the heavy door. Behind it stands an imposing figure, face obscured by a wide-brimmed black hat, the glint of steel armour just visible beneath a tabard of red and white.

“Grand Master,” you greet him, agape.

He lifts his eyes to meet yours. “It is finished,” he announces solemnly, “by the grace of God.”

You want to cry out, dance for joy, even throw your arms around the marvellous man at your door. But the solemnity of his gaze holds you immobile.

As he sweeps past, he draws his sword. You choke back the urge to protest, and watch as he makes his way to the altar. The sword is no jewel-encrusted ceremonial piece. Like the man, it is simple, stately, worn by battle yet no less elegant for it. As he kneels, he places his gloved left palm beneath the flat of the blade, and raises it in both hands toward the cross.

This set is close to our hearts, as we’ve been fortunate enough to see the De Valette sword – which the rapier is based on – in person during our annual trip to Malta for the MHFA International Meeting.

Having noted how slender the bars of the original hilt were, we replicated this in slim yet sturdy carbon steel. At the request of our client, we altered the cross of the counter-guard slightly to allow for ambidextrous practice. As the original sword’s handle bears the hallmarks of a later replacement, we created a twisted wire grip in an earlier style.

The resulting sword is around 100g heavier than the original, given that the blade edges need to be thicker for safe sparring. However, this weight is dispersed equally between the blade and hilt, offering a tangible advantage in both thrusting and cutting actions.

A similar bespoke set would start at £1300 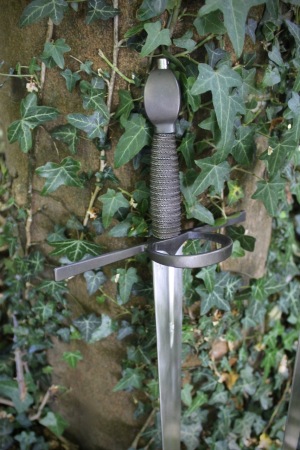 Both sword and dagger feature distinctive rounded rhomboid pommels and hardwood grips bound in twisted steel wire. The hand-forged heat-treated furniture is oil blackened to a matte gunmetal finish. The blades each have a single fuller running to the first third, and an engraved Maltese cross at the point of balance.

Seen a museum sword that you long to fence with? Get in touch to discuss your ideas.