Posted on October 20, 2021 by balefireblades

Your father had no love for war. He scolded you and your brothers for playing at knights, and clicked his tongue in disdain when armour-clad mercenaries sloped into the tavern. He once refused to serve a group of youths on their way North to enlist.

There were no brawls in his well-behaved wayhouse. The locals knew too well that a scuffle over cards or a pretty wench would have them barred for life. And much as they might have called any other man coward or traitor, a glance at the towering barman’s bulk and brawn quickly silenced such sentiments.

No, he never had any love for war. Which is why you can barely bring yourself to look at the slender, leather-wrapped object on the table before you. Your inheritance, your mother said. He wanted you to have it. With a heavy sigh and a sinking feeling, you begin to unwrap the winding sheet.

It is, as you knew it would be, a sword. Not a new sword either, but notched and tarnished with use. Broad-bladed and heavy of hilt, its substantial black bars swell into skeletal knuckles. It is as beautiful as it is unbearable. Where did your father come by such a thing? For how long has it been sat in the rafters while he preached peace and temperance? What deeds has it done, and did they die with the gentle giant who once wielded it?

You clench a fist about the battered brown leather grip, pressing the wide pommel against the crook of your palm. Of course it is a perfect fit. As you raise it from the its wrappings, a yellowed scrap of parchment slips from beneath the blade. Sword in hand, you stoop to read it.

“Finish what I could not,” is all it says.

END_OF_DOCUMENT_TOKEN_TO_BE_REPLACED

Posted on October 7, 2021 by balefireblades

“Must you go?” you ask as she laces her riding boots.

Black ribbon pulls tight against calloused fingers as she shapes the graceful loops. Sunlight sits dappled on dark hair, cast in many hues by leaves about the latticed window. You feel the strange urge to reach out and brush the gleams from her tresses like so much detritus, casting sunlight to the floor so it might be night again.

“I said not to speak of it more,” she replies, a half smile at her lips. “I have my commands – and you your custom. The palace will not wait. But for the time we have shared, I thank you.”

A kiss – barely more than a courtesy – and then she is gone, in a wave of rose-scented leather.

Alone in the chamber you bite your lip and curse your foolish heart. You might have said farewell weeks ago – when first she received her summons – and already be near-done with mourning her. But her teasing trail intoxicated you: each forgotten fancy, each silk glove unsubtly dropped. How you leapt at the chance to return them, like a prince in a fairy tale, desperate to see her again.

With a moan you let your head sink into ink-stained hands. Between your fingers the sunlight sparkles indolently, still dancing on the steel of her sword. Your head snaps up with a start. Her sword. Sat bright on the windowsill where she’d lain it the night before.

Lurching to your feet you clasp the wine-red grip, feeling the pommel press snug against your palm. You recall her tales of its deeds, her yearning for battles to come. How could she simply forget such a thing?

And then like a hound you’re away, thundering down the wooden stairs with the sword still in your hand.

END_OF_DOCUMENT_TOKEN_TO_BE_REPLACED

Posted on September 29, 2021 by balefireblades

With a sigh you sink down on the bank of the Ebro. It is late in the day, and shadows are settling in the green-velvet folds of the hills across the water. The air is sweet with fermenting reeds, seasoned with dust from the packed dirt road. Before you the river is wide and unwavering, its glassy green surface broken only by the occasional writhing carp.

This is where you come to consider the truth of the “true art”, once the clamour and clash of blades is over. You replay each bout in your mind, drawing across the floor, toying over the geometries of your play.

The fight must rise from reason, you remind yourself. It does not do to act out of passion or pride on the piste. Not in front of your master, at least – poised and pursed-lipped, the first to notice when a skillful dance gives way to irrational danger.

A susurrus of undergrowth rouses you from recollection, and you turn with a start to see the rangy form of your fencing partner emerge from the dry brush, a sword over each shoulder. In his right hand is his own weapon, slender and satin-polished. The other is yours, all spiralling steel wire and swelling black bars, which only minutes ago you threw onto the floor in frustration.

This the young man holds out to you with a smile crinkling the corners of his eyes, a silent invitation. In a moment you quell the shame the arises at the memory of your outburst, and accept the proffered sword. With a curt bow, the other falls into measure – and the dance begins again.

END_OF_DOCUMENT_TOKEN_TO_BE_REPLACED

Posted on September 27, 2021 by balefireblades

“Repel boarders,” you bellow, the command almost lost in the spume. Those men nearest you catch the message above the din of cannon and crashing waves, and relay it down the length of the deck.

By this point, there is barely any need: it is painfully obvious what must be done. The improbable black-painted galleon is swinging round, already drawing level with your deck. Its jeering crew grasp at brightly-painted rails, swords in hand, ready for attack.

And in the midst of them, their captain. He wears a dented breastplate over billowing silk sleeves, a knotted cloth about his neck. His beard and moustache, neatly trimmed, only serve to enhance the smugness of his expression. You know this man, at least by reputation. He is the Dragon, heralded a hero in his own country, yet reviled as a pirate on this coast.

You watch with a detached horror as the man vaults the narrowing strait between ships and draws his broad-bladed sword, cutting through midshipmen as if reaping the fields. He does not heed the men he fells, making straight for you, as you knew he would: the Dragon is known for a methodical man. He boards by the book.

Seeing the length of his flashing, fullered blade you sense an advantage, and draw your nimbler weapon from its sheath. You back away slowly between the mainmast and the mizzen, drawing him into closer quarters amongst the shroud of rigging, where the wheeling of that mighty blade might be encumbered.

And yet the dragon only smiles, raising the sword to the centre line as he continues his slow, almost leisurely march. With a shout you bring your own weapon against his, and at once realise your error: the pirate has no need of space for swinging cuts.

He has already taken the line, leaving you to dance desperately about it.

END_OF_DOCUMENT_TOKEN_TO_BE_REPLACED

Of Cutting and Camaraderie

Posted on September 22, 2021 by balefireblades

As with many fencers, we felt the lack of events deeply over 2020 and 2021. Crossing festivals off the calendar began to take its toll, and those regular reminders of our wider community left a sword-shaped hole. 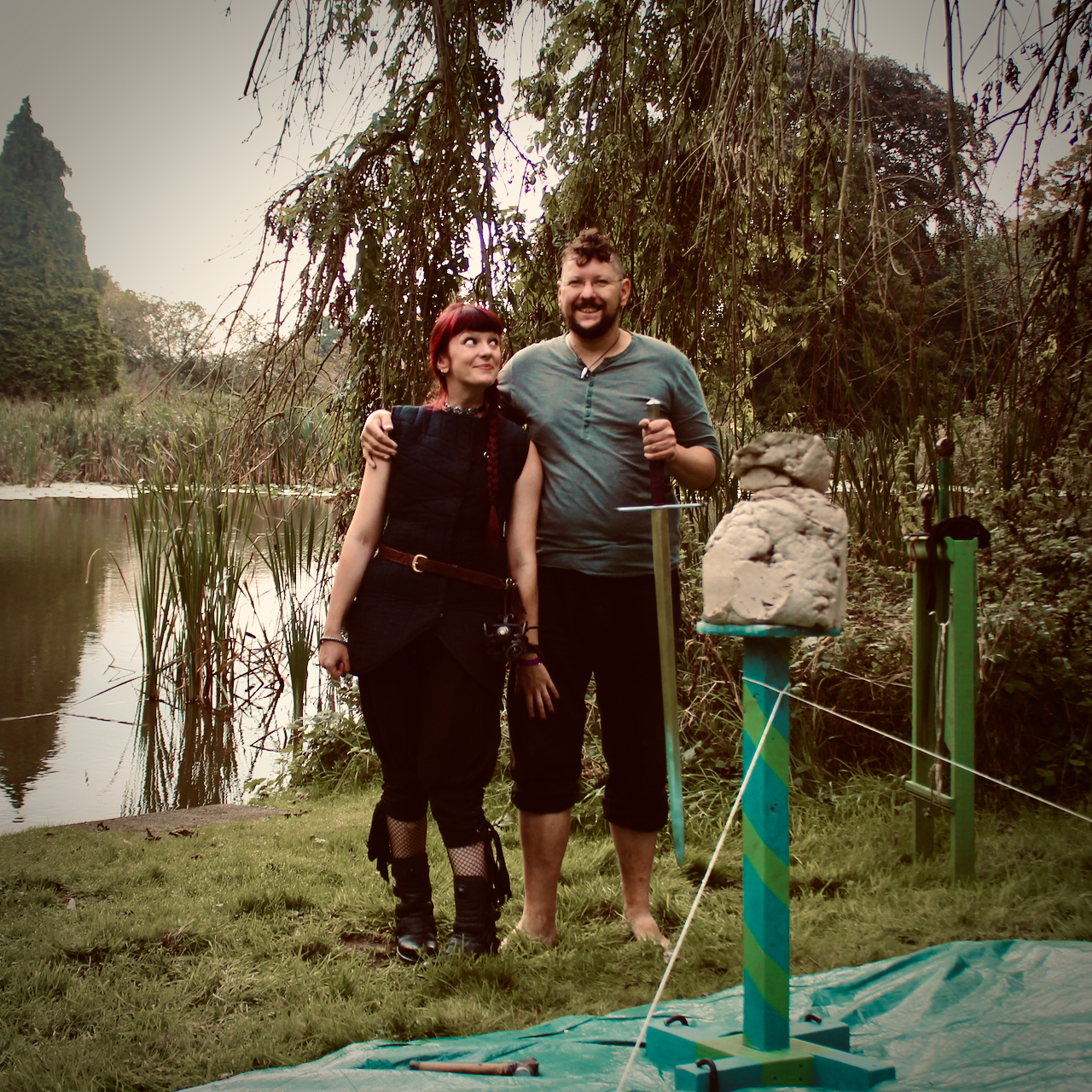 So it was with immense excitement that we packed our bags last week for an event unlike any other: Swordpunk 2021. This skill-sharing festival combines combat arts like fencing, archery, axe throwing and whip cracking with circus skills such as juggling, fire and flow arts. Tucked away on a Capability Brown-designed estate in Warwickshire, it offers acres of lakes for swimming and woodland for strolling, a well-stocked tavern and an inviting fire pit.

We first got involved with Swordpunk in 2019, when we set up a demonstration forge. We were immediately hooked on the event’s close-knit atmosphere, reminiscent of Robin Hood’s merry men training and feasting together in the woods. When we were invited to return, we decided to show off Chris’s handiwork with something new: a sharp cutting experience.

At the forge we deal exclusively with blunt-edged fencing swords, so it was a thrill to make some sharpened blades and test their mettle against 30kg of clay. We chose two longswords – one inspired by an early warsword with a broad, thin blade and the other a later, narrower design – and a Warding Sword for the task.

Records since the 1400s, such as the Kitab al-makhzun jami al-funun show Egyptian swordsmen using cones of clay to test their cutting precision with scimitars. A later attestation from the early 1900s states of the Russian Cossacks, “they learned to sabre cones of clay raised on wooden frames. The supreme art consisted in cleaving the obstacles with the point of the blade in such a way that the cut part remained in its place”.

Indeed, many of our aspiring swordspeople managed this feat over the weekend, with others slicing the cone like thin deli meat or sinking their blades deep into its centre. With Chris’s careful guidance on form and flow, both beginners and established swordsfolk found great satisfaction in facing their clay opponent.

∴ A Feast of Fire ∴

When night falls at Swordpunk, the score shifts from the clash of swords, crack of whips and clinking of hammers into drumming and wild applause. The legendary fire circle is a place for professional performers to wow the crowds with pyro magic, but also for aspiring fire mages to have a go themselves.

Having taken up staff and poi spinning over lockdown, we were excited to show off some moves. We also jumped at the chance to duel with the festival’s founder, Dan, as part of the show, combining controlled sparring with a little stage-fighting flourish. The spectacle gradually gave way to dancing with live drums, then cozying up in the tavern with tankards full of mead.

∴ A World Between ∴

Swordpunk is not your grandmother’s fencing event. With no competitive element, the focus is on trying new things, finding your own approach, and forging friendships. One is as likely to partner with a respected instructor as a complete beginner. The sparring is conversational, with each partner excited to learn from the other. 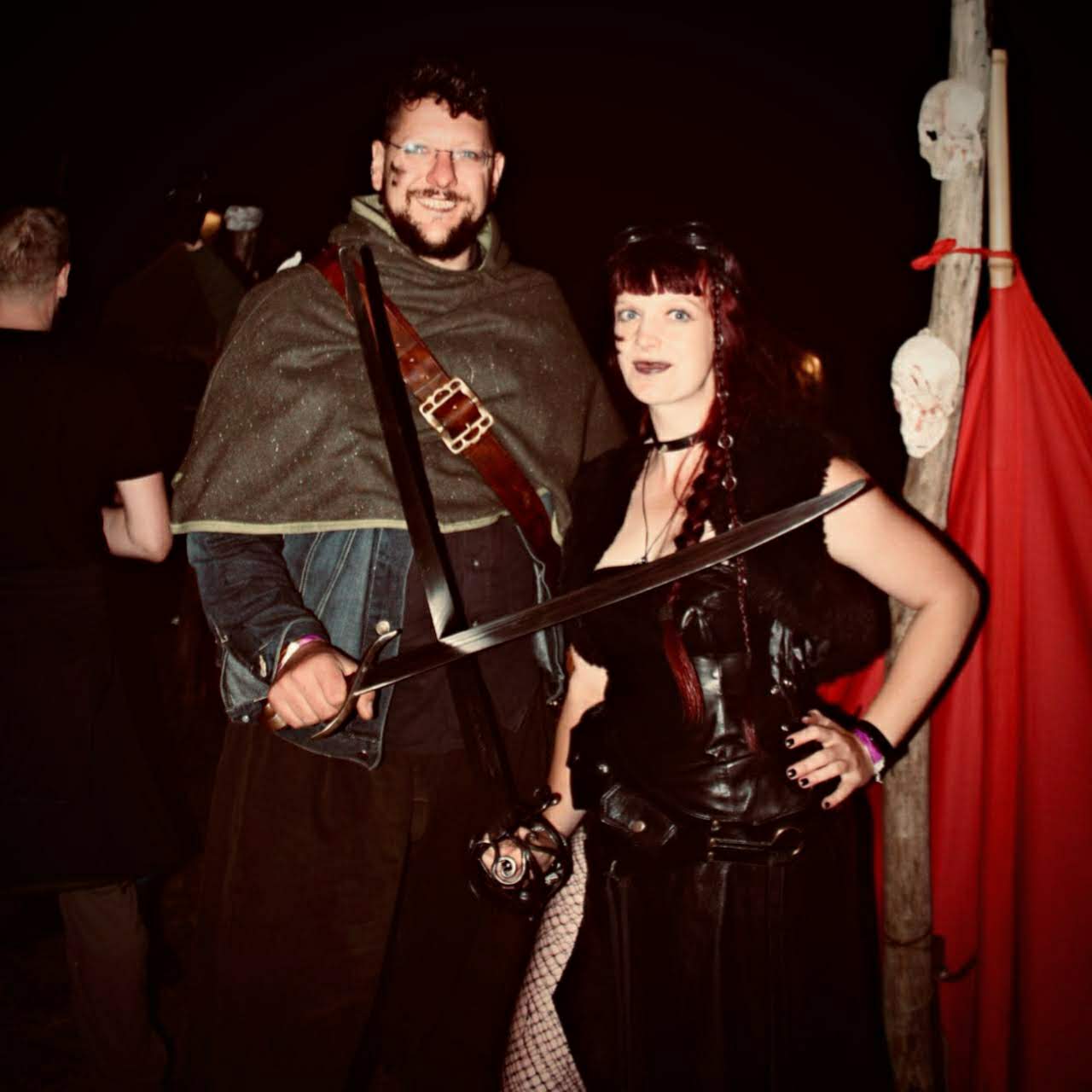 With a medieval fantasy vibe and swordpunks donning elaborate costumes, one may be tempted to see the event as an RPG experience. Certainly, there is escapism to be had in spades. But as we heaved our clay back into the car at the end of the weekend, the difference hit me: everything at Swordpunk is real. The weapons, the risks, the larger-than-life characters.

Rather than letting us play at being swashbuckling, axe-throwing, whip-cracking heroes, Swordpunk creates a space in which we can harness and hone those skills for real. A timely reminder that we are legends of our own making.

After all, isn’t that why we got into fencing in the first place?